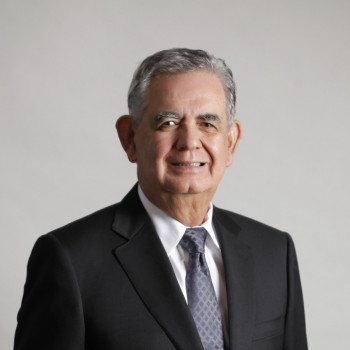 Mr. Ibazeta has been a Director of ICTSI* since December 1987. On April 15, 2021, he was appointed as Chairman of the Nomination Sub-Committee of ICTSI.

Formerly, he was named a Trustee and Vice-President of ICTSI Foundation in 2009. He also served as ICTSI’s Treasurer until February 2007, and he was appointed as President and Chief Executive Officer of the Power Assets and Liabilities Management Corporation (PSALM) by the President of the Republic of the Philippines. He served as PSALM President and CEO from February 1, 2007 to March 30, 2010. In April 2010, he declined his nomination as Director of ICTSI by reason of his appointment as Acting Secretary of the Department of Energy, a position he held from April 1, 2010 until June 30, 2010. He was re-elected a Director of ICTSI* in August 2010. In addition, Mr. Ibazeta is a Consultant to the Chairman of the Board of A. Soriano Corporation*. He is a Director of A. Soriano Corporation, Anscor Consolidated Corporation, AFC Agribusiness Corporation, Anscor Holdings, Inc., Minuet Realty Corporation, Phelps Dodge Philippines Energy Products Corporation, Seven Seas Resorts and Leisure, Inc, Island Aviation, Inc, and Vicinetum Holdings, Inc. He is also the Chairman and President of Island Aviation, Inc, President of Seven Seas Resorts and Leisure, Inc, and Pamalican Resort, Inc. Mr. Ibazeta is also the founding Chairman and a Director of Philippine Stratbase Consultancy, Inc.

Mr. Ibazeta is a member of the Board of Trustees of Radio Veritas and St James the Great Parish Foundation. He received his Bachelor of Science in Economics degree from the Ateneo de Manila University in 1963 and his Master’s Degree in Business Administration from the University of San Francisco, USA in 1968. He completed all academic requirements and passed the comprehensive exams for an MBC in Banking and Finance from the New York University in 1975.